Book One of Arcane Artisans

Adrienne Morales is a hunted woman.

Stalked by Voids—people immune to magic—and pursued by a deadly past, Adrienne wants nothing more than to avoid spells and sorcery. Her powers as an enchantress make that impossible. Every few days she must release the magic gathering around her, or it’ll steal her sanity. The only way to stay alive is to practice her magic in secret, hiding enchantments in works of art she sells in her craft store.

When a firebreathing psychopath controlled by enchantment tries to burn down her store, Adrienne unleashes her powers to stop him. Unfortunately her battle has a witness—Adrienne’s handsome business partner. Turns out he’s a Void, and sworn to a Union that executes rogue magic users. Worse, the firebreather isn’t the only victim to pop up around San Francisco. Someone is using magic to create monsters and destroy minds, and the Void Union wants them dead.

Now Adrienne must capture the rogue enchanter before they ruin more innocent lives—and before the Voids punish her for the rogue’s crimes. But Voids aren’t the worst thing chasing her. Every enchantment she crafts makes it more likely her past will track her down. And if it does, madness will be the kindest fate awaiting her

Tea Recommendation: I was sipping on my Red Raspberry Leaf tea while reading the Enchantress Undercover.

“..target, a channel, and a focus. The focus shapes the nature of the enchantment, the target receives it, and the channel binds them together.”

“Magic swirled around me, burrowing under my fingernails and scratching in my ears. It was chaotic, unfocused, not concentrated like normal raw magic. I had to release it, now. I yanked my necklace off, activated its enchantment, and quickly tied it in a knot. I set it in the dirt next to the grass, then pulled out a strand of my own hair and laid it connecting the necklace and the edge of the field. Be a knot, I chanted. Bind what is within. Entangle, twist, snag.”

So, I rated this 5 stars because of how engrossed I was with it. I’d dream about it when I go to sleep so that qualifies for a round of applause👏👏 & a 5 star rating. I recommend to anyone who loves urban fantasy, witches, magical/paranormal, and fun fast paced beginning of a new series!

Let me know if you have read this so we can chat about it!! Ask me questions about it or anything in general. 😘👌

Just a twenty-two-year-old with a name of a generic flower, Rose. New mommy to a little girl! Drinking tea and reading books take up most of my life experience so why not share my experience!(: With this blog, whenever I review a book I will share with you the type of tea to drink to heighten the experience. View all posts by teawithrosestomes 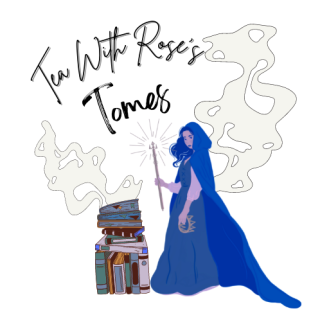 Just a twenty-two-year-old with a name of a generic flower, Rose. New mommy to a little girl! Drinking tea and reading books take up most of my life experience so why not share my experience!(: With this blog, whenever I review a book I will share with you the type of tea to drink to heighten the experience.

Book reviews from that girl who is always reading.

YA novels and writing